The night’s storm died away, but that Tuesday morning afterwards began still cloudy and was the coolest of the extended holiday weekend. 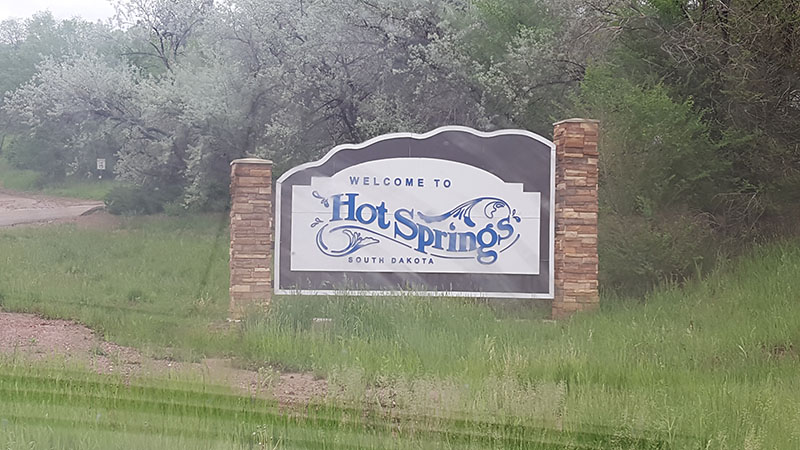 Fortunately, it wasn’t so cool that I changed my mind about visiting Evans Plunge Mineral Springs in Hot Springs.  I entered the small town around 7:30 a.m. and was able to get enough of a Wi-fi signal from my phone to find the direct route to the facilities.  My timing was perfect because there weren’t many people there.  I actually had the sauna to myself for several minutes. 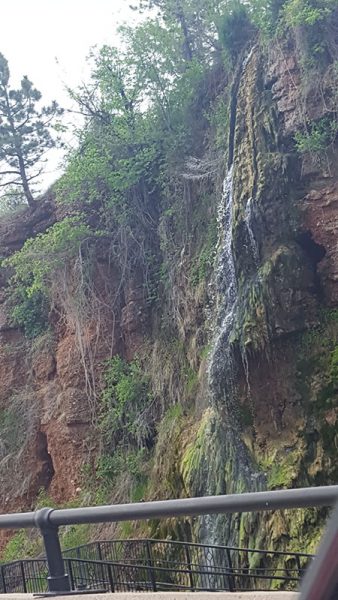 There were also few swimmers using the indoor swimming pool as I approached.  I again reminded myself as I slowly walked down the steps into the shallow end that it had been decades since I swam, and what my body could do then was not the same as where things stood now.  Those words of warning faded as I quickly adjusted to the pool’s waters. I also noticed that I’d drawn the immediate attention of the lifeguard, which I didn’t mind in the slightest.  I drifted further from the pool’s edge thinking maybe I could swim a few strokes.  Yep, I got in a few strokes alright, then I realized that I was potentially in trouble.  I’d gone out far enough that my feet no longer touched the rocks on the pool bottom, and I wasn’t able to keep my head above water.  I went down once, twice, and I started to get really worried about my situation.  Then, I remembered that when I was taught to swim all those decades ago, I was told over and over again, “you panic, you drown.” When I finally surfaced, I saw feet standing at the pool’s edge and gratefully realized that the lifeguard was poised in very close proximity to jump into the pool if I hadn’t successfully gotten myself together.

He made sure I was okay, gave me a couple of flotation devices and kept a watchful eye on me for the duration.  Fortunately, after that initial bit of excitement, the rest of my time in the pool was uneventful (and, no, I didn’t take any pictures of my little adventure–hopefully no one else did, either).

Hot Springs is a quaint little town with a number of historical buildings and a small park running down what I’m guessing was its main street.  I did have a chance to take a few photos as I drove through.  One is here and the rest are available on my Flickr site.

A work colleague had suggested I visit the Wounded Knee Massacre Monument. I had not realized how close I’d previously come to the site, so I was glad that the day was still early enough for me to go there this time.

The site, not surprisingly, is quite a bit off the beaten path, accessible from state roads and up a rugged but short drive. It doesn’t take much to see that the surrounding communities lack financial wealth and had few obvious opportunities for work available for the area residents. I purchased the dreamcatcher displayed in one of pictures from a woman who maintained a stand below the site entrance. I tend not to carry much cash, preferring to use cards for purchases as much as possible, but I am hoping that even that small purchase helped her. And RB now has a dreamcatcher hanging from her mirror. 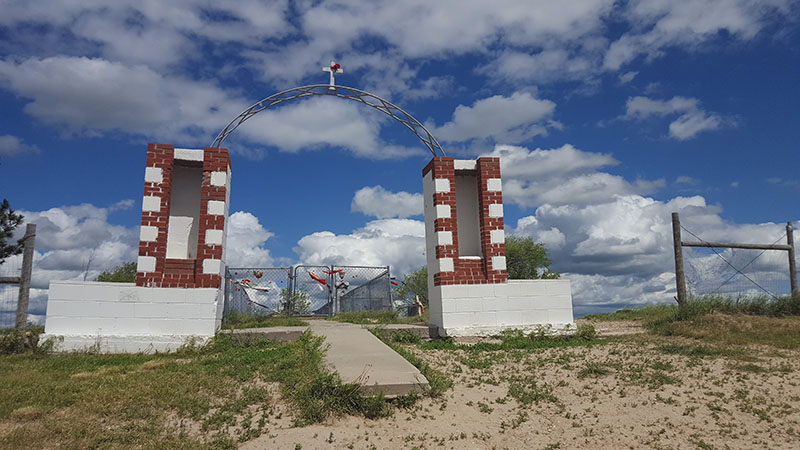 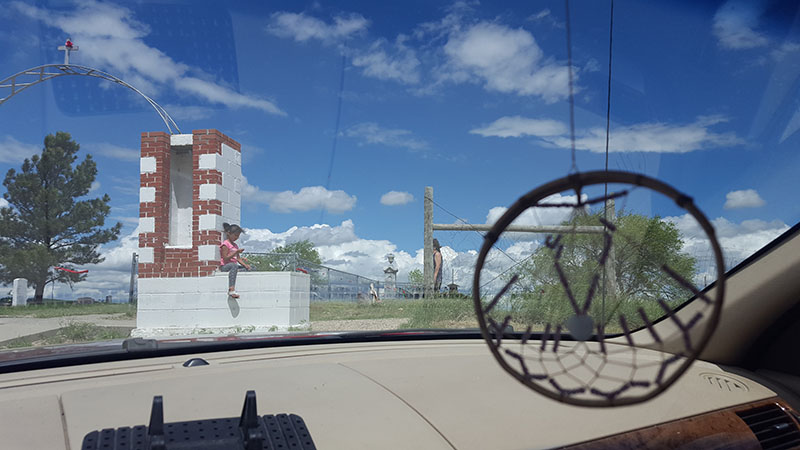 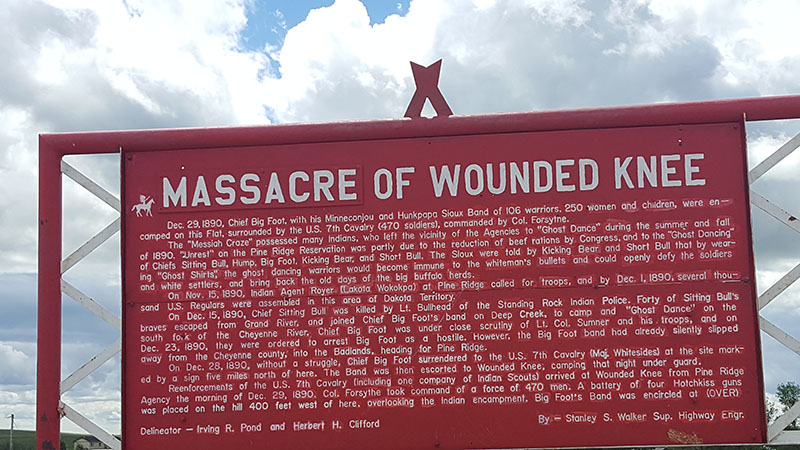 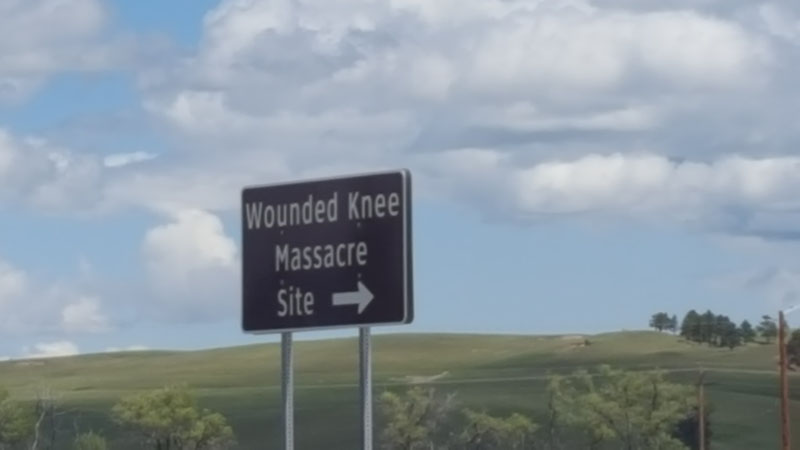 The monument’s real impact comes–I believe–from at least reading something about the history of the massacre beforehand so that you can be more open to experiencing the simple tribute to the fallen. But even if you don’t learn anything about the massacre in advance, there is an… overwhelming sadness that seemed to pervade all around it, even to the very winds that blew overhead. And, from my perspective, the simplicity of the monument itself served more effectively to tell the story than an expensive museum or shrine would have.

By the time I left Wounded Knee, I was still more than 600 miles from home and knew I needed to get back there in time to get some sleep before going to work the next morning. I decided that rather than taking state roads all the way east to I-29, I would first go north back to I-90, where I could then take advantage of its 80-mile-an-hour speed limit. This seemed like a good time-saving plan (even considering that I slowed down when I could to take pictures of various rock formations) until I neared the Missouri River and realized that I had one more chance to get daytime pictures of Dignity. A quick 15-30 minutes, what would be the harm? And, besides, I could possibly get a quickie nap before hitting the home stretch.

Well, the problem was that when I awoke from that quickie nap, I discovered that Native Americans were beginning to gather near the statute. In fact, it was the drummers who had awakened me. I quickly found a seat on a picnic bench nearby and watched as people on horses rode around Dignity several times, then–once the music and riders stopped–an elderly gentleman began to speak. As the ceremony continued, I took several pictures and tried to video record the event, but the wind was too strong to get any clean audio of what was said. I was surprised when, although I was clearly only a witness, another gentlemen gave me a pinch of an herb–my colleague guessed it was sage–with instructions to scatter it to the earth once the prayers were complete. 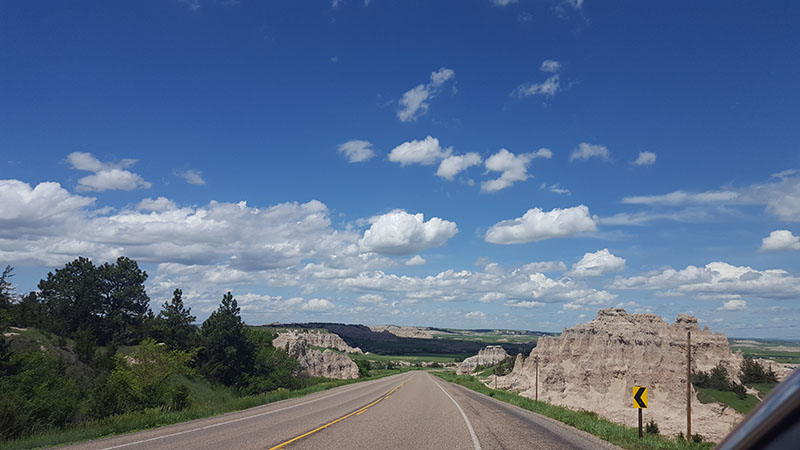 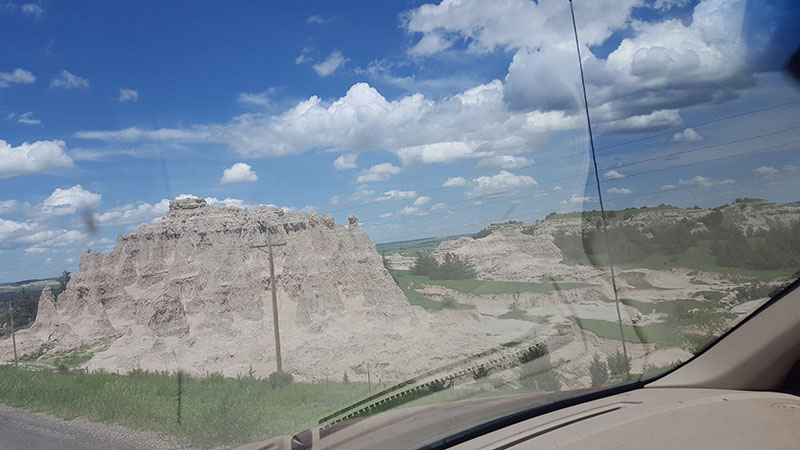 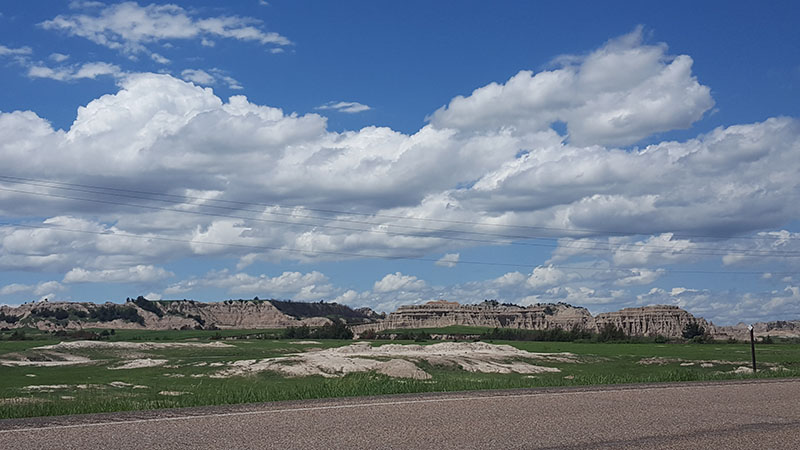 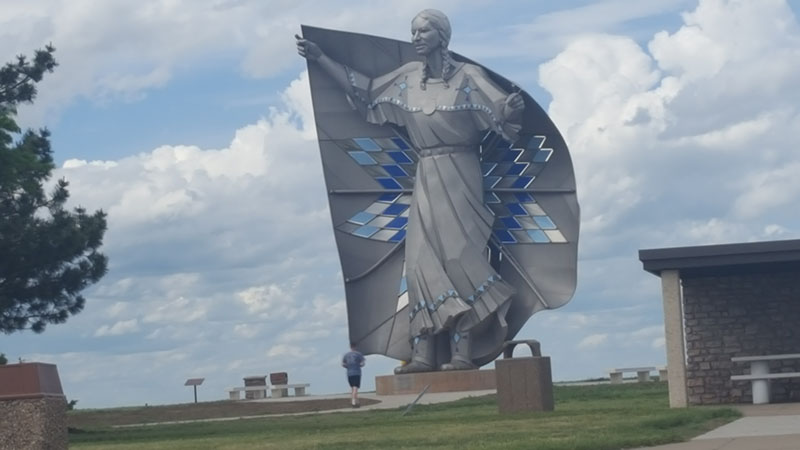 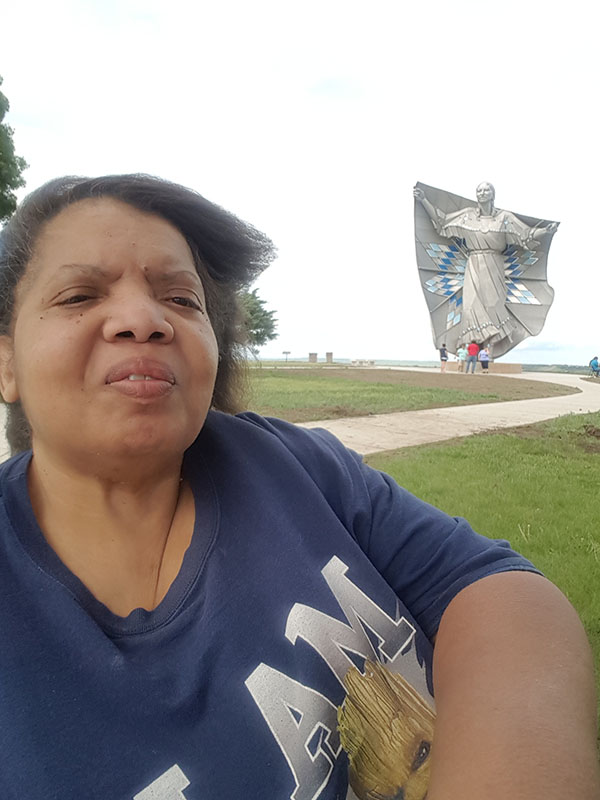 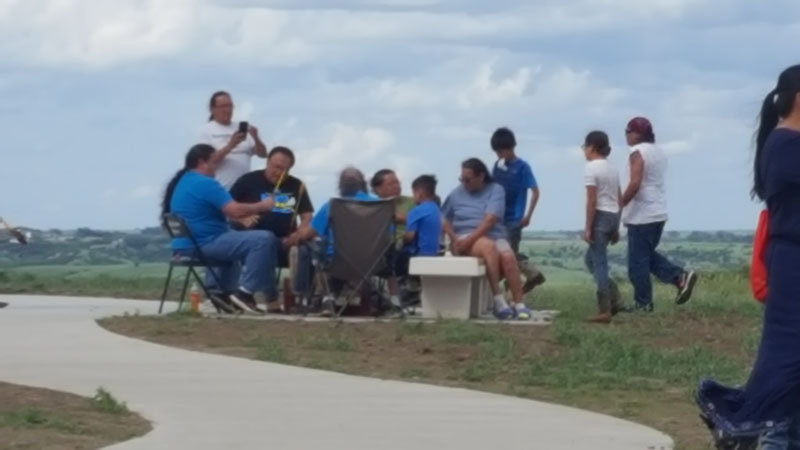 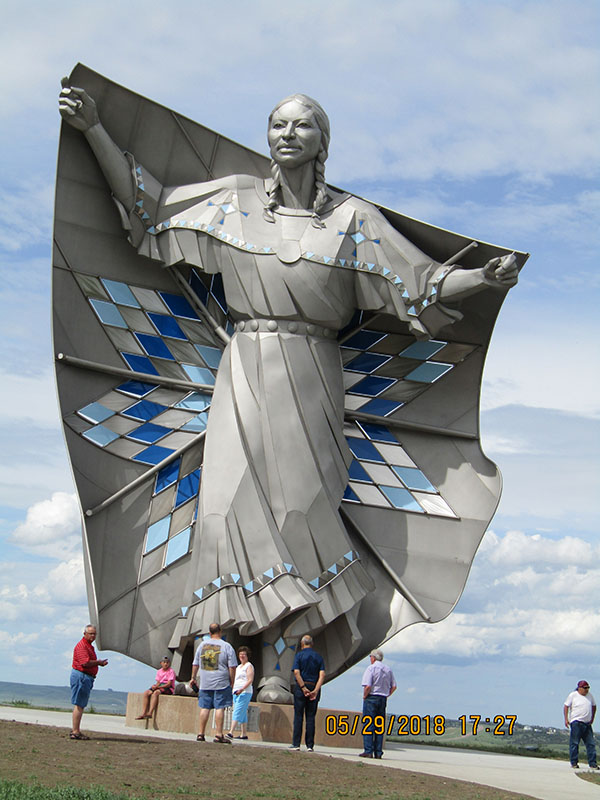 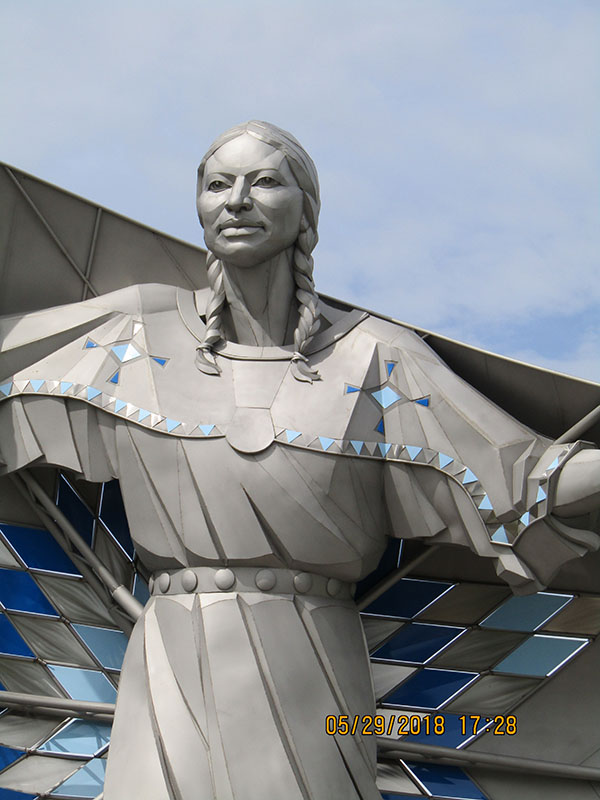 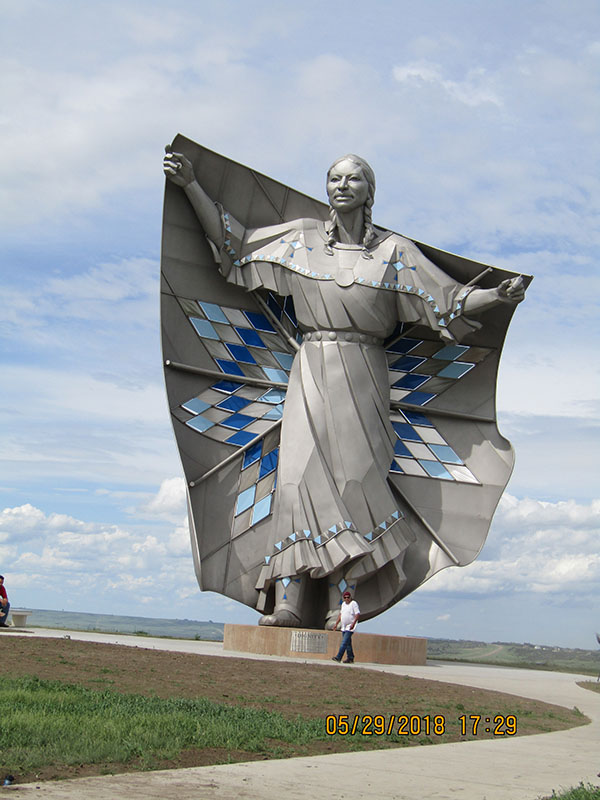 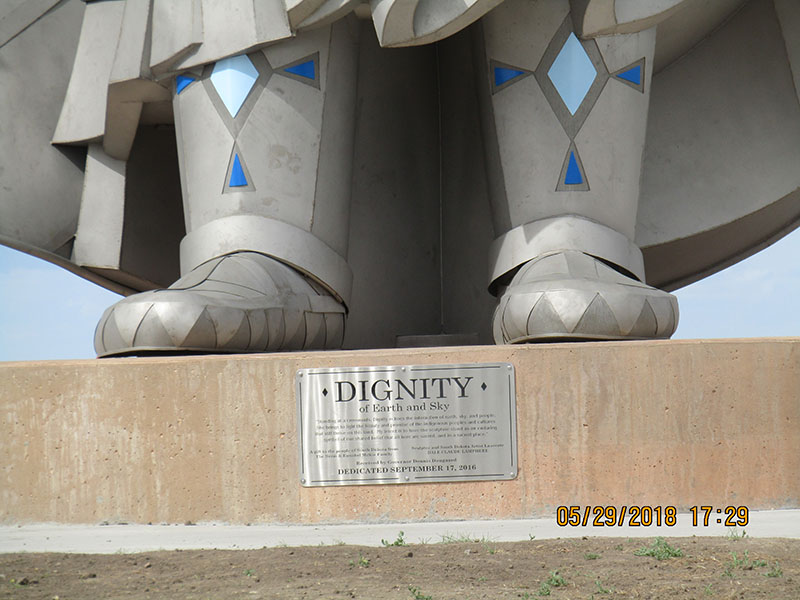 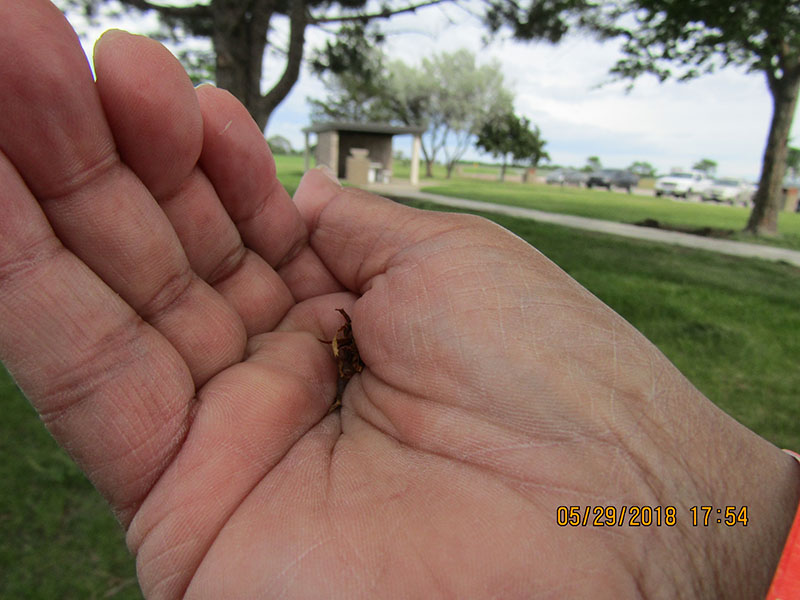 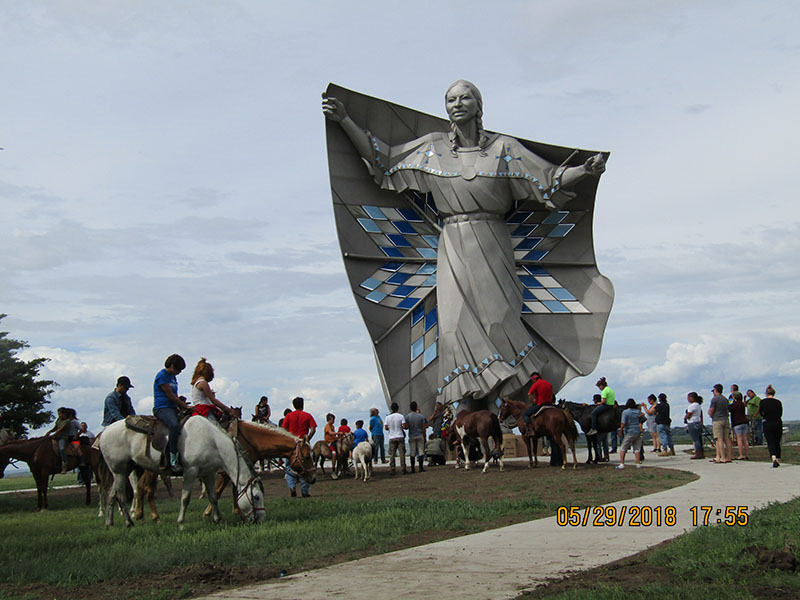 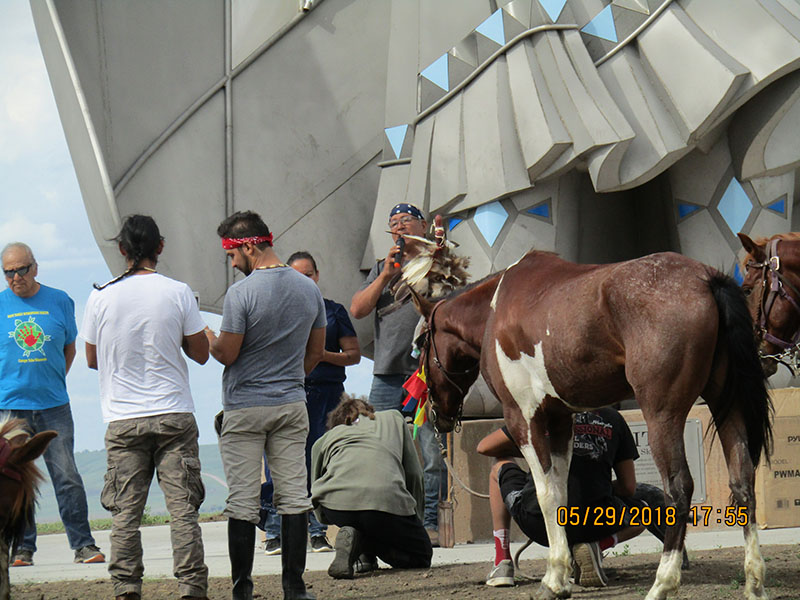 The ceremony was still in progress when I finally had to leave, but I was honored to have been there.

I got down to serious driving, now only stopping once for gas and a bathroom break. Fortunately, the traffic was very light, with rush hour over by the time I reached any sizable cities.  RB and I finally pulled into the driveway of home at 1:30 a.m. Wednesday morning. I wish I’d taken that day off to recover. Instead, I was at my desk at 8:15 in the morning, a bit spacy but functional.

Anyway, the route for that Tuesday: