Between the late night before and the day’s cold weather, my mother, sister and I got a slow start on Saturday morning.  My sister and I had already decided to forego the tour of the Statue of Liberty that had been scheduled in favor of a few extra hours of sleep and of keeping our mother company.

When we finally arose, we decided to prepare to vacate our current room and, since breakfast there yesterday had been  less than desired, we’d would check out and eat at a nearby restaurant.  The check out, breakfast and relocation to our new abode for the day were uneventful.  So, as the afternoon progressed, I spent my time texting and finally calling one of my former host daughters from the college where I work.  She was now living in the city, and I was hoping we could spend a few hours together before my scheduled departure.

Fortunately, she was able to come to the hotel, and we had a lovely time catching up.  Then, when she said she had nothing else planned for the evening, we decided to have dinner together at a restaurant on Times Square.

While the temps were still on the cool side, the rain had gone by the time we jammed ourselves into an Uber car and rode to Times Square.  The restaurant was called Bubba Gump and was a seafood joint with a “Forrest Gump” theme.  My sister had selected it because she knows that I try to inhale as much seafood as I can whenever I’m on a coast.  It must be pretty popular because the place was SRO with folks waiting to eat.  The wait wasn’t bad, and the food and service was quite good.  One could even order one of their specialty drinks in a lighted glass.  We had a nice time, but unfortunately, we didn’t allow ourselves much time to eat before the 8:00 p.m. start of the show we were to attend.

Yes, we had wanted to see “Hamilton,” but with ticket prices starting at $734, that wasn’t going to happen (besides, I’m perfectly willing to wait until the tour comes to Des Moines where the tickets won’t be so budget busting).  Instead, we went to “Beautiful,” a musical based on the life of singer-songwriter Carole King.  I had no idea that she had collaborated on so many popular songs from the 1960’s.   It was so tempting to sing along, and in fact, the cast invited the audience to join in for a recap at the end of the show. 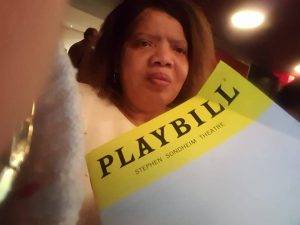 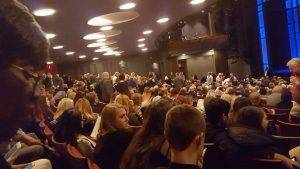 We had scheduled nothing for Sunday morning, and we wouldn’t need to leave for the airport (me) or train station (my mother and sister) until mid-afternoon.  Thank goodness for the free time because it allowed us a last opportunity to spend a few hours together before parting company.  And I certainly didn’t mind the much less adventurous flight back to Cedar Rapids.

Overall, it was a great weekend!!